A World Cup Adventure in Russia

So, you fancy following your national team in their quest to lift the Word Cup in Moscow this summer? What can you expect from the host country? How easy will it be to travel or find affordable accommodation? Can you still get match tickets?

These, and many more questions, will be going through the minds of football fans across the globe as they weigh up the pros and cons of making the trip to the biggest country on earth, for the the biggest sporting event on earth.

We shall attempt to answer some of the most obvious queries about attending the World Cup here, and also give you some useful information about Russia, one of the most fascinating and exciting countries you’re ever likely to visit.

Normally, citizens of most countries require a visa to enter the Russian Federation, which requires extensive form-filling, and can be quite costly. However, for a period beginning ten days before the opening match (ie. From the 4th of June) and lasting until ten days after the final match (25th of July), people attending matches at the World Cup can enter Russian territory without a visa, provided they have a valid travel document, usually a valid passport, and a Fan ID.

The Fan ID is a small laminated form containing some personal information which fans must be in possession of to enter Russia and also to gain entrance to whichever matches they wish to attend. It is best to apply for the Fan ID as soon as you receive confirmation that you have been lucky enough to get tickets.

You can apply for your Fan ID via the Fan ID website. As well as visa-free entry to Russia and to matches, the Fan ID also entitles you to certain other benefits for the duration of the World Cup 2018.

For those who merely wish to travel to Russia just to be there to experience the World Cup atmosphere, the normal visa application regulations will apply. These can be found on the website of the Russian Embassy in your country of residence or here.

Most intercontinental flights into Russia will take you to Moscow, however there are a few international airports at some of the host cities, with Saint Petersburg in particular being well-connected to western Europe. Whichever your port of entry into Russia there are great transport links to all the host cities.

On safe arrival in Russia, one of the first things you will want to do is to re-establish contact with your family and friends back home. One of the easiest ways to do this, in a country which still has very high roaming charges, is to purchase a 5GB Data Plan for only €25 from www.travelsim.com. This will keep you online to make your travel easier and also has free incoming calls so it’s cheap and easy to stay connected with home. 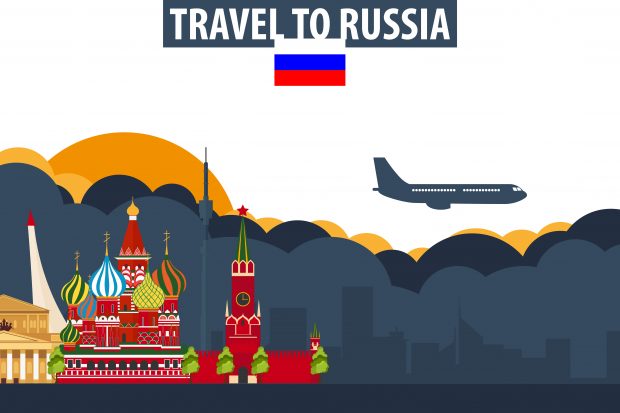 Visitors to the Wold Cup 2018 will find more or less the same types of accommodation in Russia as can be found anywhere else in Europe. From the multi-national chains of top-quality hotels, to hostels and couch-surfing, every type of accommodation is now available in Russia.
As the World Cup is taking place in large cities there are plenty of places to choose from but, even so, it is advisable to book early before prices rise too steeply and finding a room becomes ever more difficult. For those who want to play safe, rather than try to find a room independently, FIFA has a list of approved hotels for every host city and its environs which you can access here.

For the really budget-conscious, each host city will also be providing officially-sanctioned campsites for use by fans. Other accommodation being made available includes houseboats on the Moskva river and several university dormitories in various cities. So, even if you have a very tight budget, you should be able to find something. Further advice on accommodation can be found on the official FIFA World Cup website. 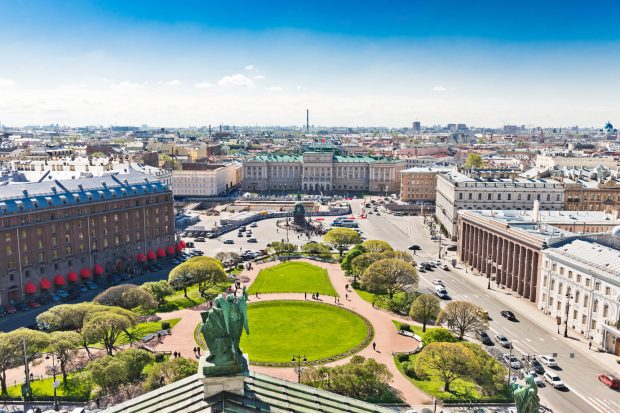 For those who have never travelled in Russia before the distances between World Cup venues can seem daunting. Ekaterinburg, for example, lies around 1,700km, or just over a thousand miles, east of Moscow. Thankfully, Russia has more than adequate transport links between its major cities. Most of them have airports which will provide flights to all the world Cup host cities and the Russian rail network is extensive and efficient.

Holders of Fan IDs can also take advantage of free travel between host cities on 500 special trains, laid on specifically to transport fans around the vast expanses of Russia. These are extra trains, and the already highly interconnected rail network can accommodate the fans who do not have the Fan ID certification.

If you are travelling in a small group it might make sense to hire a car for the duration of your stay in Russia. There are dozens of rental agencies in every major city in the country so it is advisable to shop about for the best deal and this car rental website is a good place to begin your search. Bear in mind, though, that the huge distances to be covered in Russia mean you should really have more than one driver in your group.

Can I still Get Tickets?

If you are among those still trying to purchase tickets for the games in Russia 2018, time is short, but some are still available.

The first block of tickets went on sale from September 14th 2017 until November 28th 2017. A second phase of sales began on December 5th 2017 and, like the first phase was split into two periods, the first of which (a random draw) ended on January 31st 2018. The second period of this phase will run from March 13th 2018 until April 3rd 2018 on a first come, first served basis.

A small amount of tickets will be available during the tournament itself running from April 18th 2018 until the day of the final, July 15th . These will also be available as first-come, first-served.

What to Expect From Russia

As noted, Russia is a huge country, which straddles virtually the entire land mass of Eurasia and has eleven time zones. When people in Russia’s far east, further east than Japan, are tucked up in bed at night, the citizens of Kaliningrad in the west are barely able to see the first hint of dawn.

Russia is a European country which, through exploration and conquest, expanded its territory to cover the whole of northern Asia, in much the same way as the United States and Canada expanded westwards during the 18th and 19th centuries. This means that the current Russian Federation is home to a huge number of different cultures and ethnicities. There are, in fact, almost 190 ethnic groups within Russia, designated as ‘nationalities’, many with their own languages. These range from Eskimo-Aleut in the far east, to Sami up near the border with Finland. From populations numbering in the millions, to only a handful, these people make up the rich cultural tapestry that is modern Russia.

Even within European Russia, where almost all the World Cup matches are taking place, there are many nationalities, many with their own cultural heritage and languages still intact, often with museums or other cultural representations.

There are also many people from the former Soviet Union resident in Russia, maintaining their cultures and languages. Many of these ethnic groups, especially in the larger cities, have brought their cuisines and music with them, so there is no shortage of good food to be found in Russia’s restaurants. Georgian cuisine, in particular, is very highly regarded, with delicately spiced meats, vegetables, cheeses and breads with a distinct Asian influence and should be tried at least once during your stay.

For the more adventurous among you, a Kazakh restaurant may be more to your liking, with a central Asian cuisine reminiscent of Mongolia. In one of these establishments you could even try some horse, if the fancy takes you. Wherever you go, whatever you eat there is certainly no lack of choice. If all you want is beer and a pizza, then you will find that without a problem. 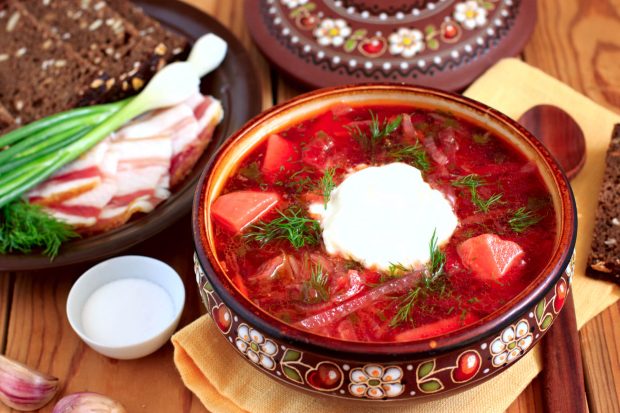 In Russia, of course, you will find a different alphabet in use. The Cyrillic alphabet, similar to, and derived from Greek, is in use throughout this vast land. It may seem daunting at first, but it is quite easy to learn what the different letters are in the Roman alphabet, although that may not be of much use of you don’t know what the words mean! Thankfully, though, because of the World Cup, all the signs in metro stations, train stations, airports, etc. will also be available in the Roman alphabet, and all information regarding the World Cup will be displayed in several languages.

Every one of the host cities in Russia 2018 has a host of cultural attractions that should have something for even the most die-hard football fan to enjoy during the breaks between games. Moscow is Europe’s largest city, with a population of around 17 million in its metropolitan area, and has more cultural offerings than you can shake a stick at. Due to the Soviet influence there are plenty of museums, galleries, theatres, opera houses and so on in almost any major Russian population centre, and the World Cup host cities are no different.

For those, though, who don’t want to miss a single kick of a single game, each city will have fan zones available, ranging in capacity from 10,000 to 31,000, in central locations. These are the ideal venues for fans who can’t get tickets for the games to enjoy the whole spectacle.

One thing is certain; whether your team is successful or not, whether you can get those precious tickets or not, this World Cup promises to be one of the most exciting yet, both on and off the field. First time visitors should be thrilled by the sheer vitality and excitement of Russia itself, those returning will warm to the friendly embrace offered by Mother Russia, so, no matter how your team performs, make sure you enjoy the adventure of a lifetime at World Cup Russia 2018.

How to save on roaming costs?

With all the constant travelling around in a huge, and for most, unknown country, it’s always good to keep yourself connected with your travelling companions and those back at home. One of the easiest ways to do this when in Russia, where roaming charges are still high compared to many other countries, is to purchase a TravelSim International Sim Card with 5GB Data Plan and free incoming calls.  Outgoing calls are just 0.39 EUR/per minute. It’s cheap and easy to stay connected with home. You can save on roaming costs and use you phone without fear for expensive bills.