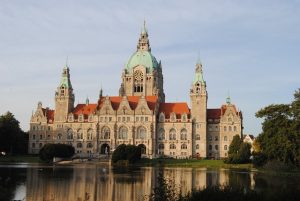 Executives from TravelSim, a seamless callback service which enables you to save money by using an international sim card when you are travelling, were delighted to participate in the hugely successful CeBIT 2014 which took Hanover by storm last month.

CeBIT is the world’s largest and most international computer exhibition, held annually in the German city of Hanover, in Lower Saxony.

Organised by Deutsche Messe, it is considered a barometer of all that is innovative in the IT industry and includes the fast-moving telecoms industry, of which are international and European sim cards are an integral part.

Statistics from the show, which closed on March 14th, speak for themselves. Deals of more than 25 billion euros were made at CeBIT, which stands for Centre for Office Automation, Information Techonology and Telecommunication in German.
The four-day event, which was founded in 1970, was attended by thousands of professionals, of which one in three were Chief Information Officers (CIOs).

Oliver Frese, the Deutsche Messe Managing Board member in charge of CeBIT, said: “The revamped CeBIT has proven a complete success. Our sharp focus on business users really hit the mark.
“Twenty-five billion euros worth of business have been negotiated here at CeBIT, up by as much as 25 percent over last year’s figures.”

He said that 92 per cent of all visitors were IT professionals, with more than 2,000 CIOs and other top decision-makers attending CeBIT 2014. Meanwhile, more than 25 per cent of visitors came from abroad.

It was also the most youthful CeBIT ever with more than 300 start-ups at the show, all of whom brought new energy, entrepreneurial drive and creativity to Hanover. The young entrepreneurs were able to build relationships with large numbers of established firms, investors and venture capitalists.

CeBIT’s lead theme of “Datability” addressed the issue of big data, a sweeping trend throughout the international IT landscape. The ability to use and manage huge volumes of data responsibly is revolutionizing many business models, production processes and applications.

Next year’s CeBIT will be staged in Hanover from 16 to 20 March 2015 and TravelSim will hope to be at this innovative event once again.