The Most Awesome Australia Destinations You’ve Never Heard Of

You’ve probably heard of the most famous Australia destinations – such as Uluru, Sydney Harbour and the Great Barrier Reef.

But what about all of the amazing off-the-beaten-track destinations in Australia that you might not have heard of?

By all means, it’s certainly worth visiting the main attractions featured in the popular top ten lists. However, make sure that you leave room for more. After all, Australia is a huge country and there is a lot to see. If you can venture off the main tourist trail you’ll get to see another side of Australia and you’ll have a more interesting experience on your travels down under.

Here are some truly amazing destinations in Australia that you probably haven’t heard of, but are definitely worth checking out.

When the railway in Newnes, Australia closed in 1932, this tunnel through the sandstone of Wollemi National Park in New South Wales was closed down and abandoned. Over the years some new residents moved in – thousands of tiny worms that lit up the tunnel’s interior with their bioluminescent glow.

These creatures are the larvae of the fungus gnat and they cling to the rocky walls of the tunnel. It’s a 22km walk each way to the tunnel along the old railway line from Newnes, or you can drive from Clarence or Lithgow and walk 1km to the tunnel. You can even see the glowing creatures in the daytime – simply head to the middle of the tunnel where it gets dark and turn off your flashlight. After a minute or two, the gnats will begin to shine like a night sky full of stars. 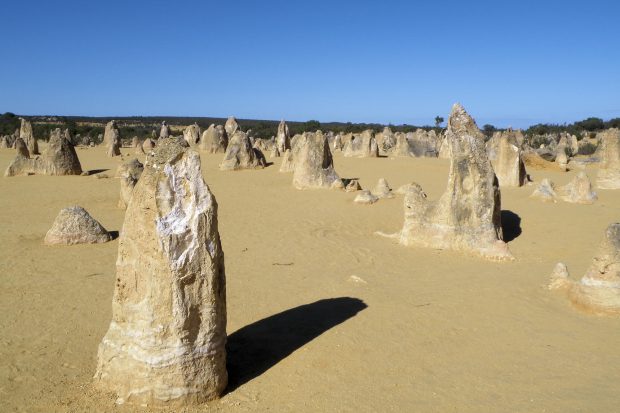 Take a day trip one hour north of Perth and you will find yourself in the vast, dry Western Australian Nambung Desert. Here you will find the pinnacles – a collection of strange limestone rock formations in yellow sand.

Walking through this surreal landscape will make you feel like you are on another planet. The area has a somewhat dark and disturbing legend in Aboriginal culture. It is claimed that each rock represents someone who died in the quicksand of the desert. The best time to visit is around sunset, as the strange landscape has a beautiful warm glow and the long shadows cast by the rocks create interesting photo opportunities.

The platypus is a strange animal indeed. The first scientists to examine the specimen thought that they were victims of a hoax. They are mammals but they lay eggs, they have venomous spurs and retractable webbing and they don’t have teeth so they simply chew their food by filling their mouths with gravel. Pretty weird, huh?

If you want to see a platypus in the wild (and come on, who wouldn’t?) this is the best place in the world to go. It is located in Eungella National Park and it is a 90 km drive west of Mackay. This dense green tree cover, shrouded in mist, if the oldest stretch of subtropical rainforest in Australia.

There are several platypus viewing platforms along the river where you can stake out a spot and keep an eye out for these strange creatures. 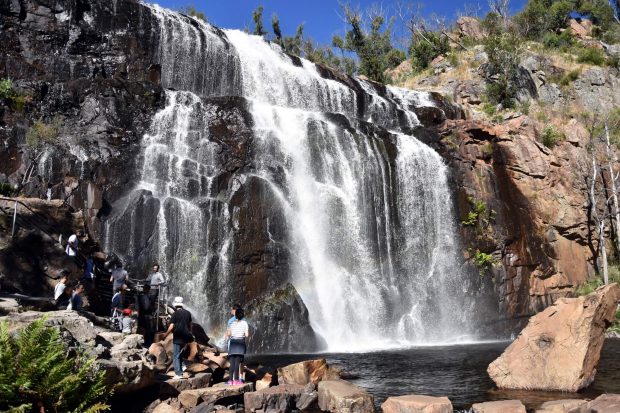 The Great Ocean Road is the most famous tourist attraction in Victoria, but it’s certainly worth heading inland to visit the Grampians for an equally gorgeous but less well-known slice of natural beauty.

Throughout these sandstone rangers you will find pretty waterfalls, stunning lookout points and a series of excellent hiking trails that will excite adventurers. The best time to hike is during the springtime, as the Grampians are known as the “Garden of Victoria” due to their spectacular wildflowers.
Plus, this region is also a delight for foodies and wine lovers. You can stop in at the local wineries and restaurants to sample the delicious local creations of this underrated destination. 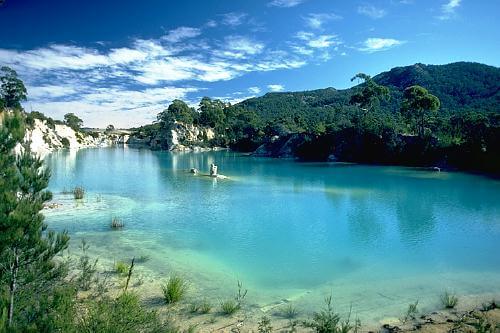 When you first set eyes on this lake, the bright blue hue of the water looks wonderfully inviting. On a hot summer’s day you might be tempted to jump in and go for a swim. Avoid doing so, however, as the reason why the lake is such a beautiful shade of blue is due to the toxic heavy metals from past tin mining activity in the area.

The shores of this pretty lake are often used for picnics and camping and this area is also popular with gem hunters, as topaz, smoky quartz and amethyst are often found in the region.

Immerse yourself in the oddities of Australian hippie culture at this community, located in the rainforest hinterland west of Byron Bay. Artists, students and other groovy cats started to head to Nimbin in the 1960s thanks to a local art and music event called the Aquarius Festival and a counterculture movement was born here. Although the festival came to an end, many people stayed here and form a self-sufficient alternative lifestyle community within this incredibly gorgeous valley.

These days, the vibrant little town features arts and craft shops and even a hemp museum. You’ll feel like you went back in time to the 1970s – everyone wears tie-dye and you may smell the aroma of a particular herb in the air. It’s a strange and surreal little place and an interesting day trip from Byron Bay. 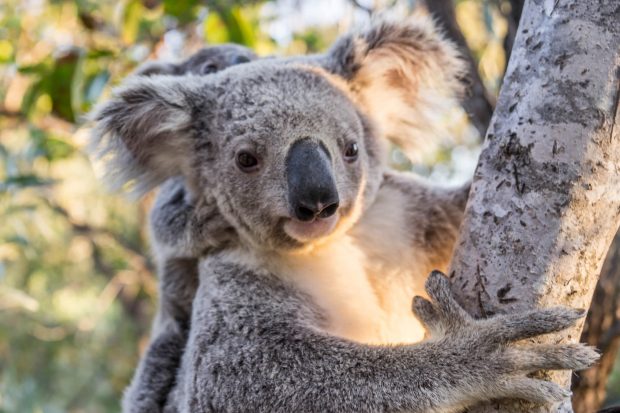 When Captain James Cook passed by this island in 1770, he claimed that his compass was affected by a mysterious pull that pointed his compass toward it. Many modern instruments have tested the magnetic pull of the island and have not experienced what Cook described, but the name still remains.
Either way, Magnetic Island is a very attractive place to visit (pun intended). It is a pristine paradise for nature and wildlife lovers, only reached by ferry from the mainland city of Townsville. Within the wild rainforest you’ll have a good chance of spotting wild koalas sleeping in the trees. You can also explore the remains of a WWII observation deck overlooking the bay. 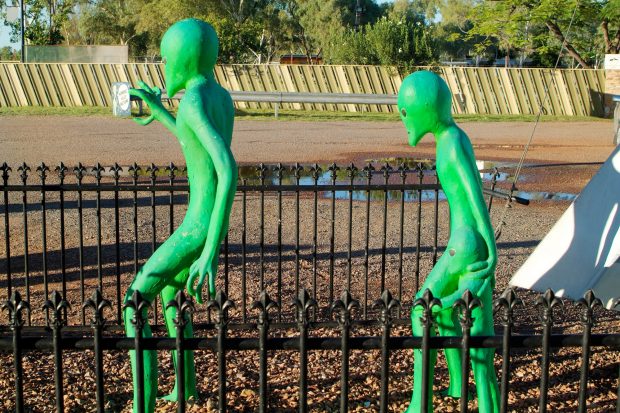 Sometimes when you are driving across the vast, barren landscapes of the Australian outback it can feel like you are on another planet. When you visit the strange little town of Wycliffe Well, the feeling intensifies. This odd town is located on the Stuart Highway, 130 km south of Tennant Creek and 380 km north of Alice Springs. It is known as the UFO capital of Australia.

Decades of strange extraterrestrial lore surrounds this little Outback town and UFO sightings have been recorded there since WWII. The local restaurant is filled with enough newspaper clippings and images to convince even the most skeptic visitor. Spend the night here and gaze up at the sky – you just might see something strange. Even if you don’t spot a UFO, you can still see some of the stunning local sunrises and sunsets and the dazzling amount of stars.

One of the strangest and creepiest destinations in Australia, Port Arthur was a historic convict settlement located near Hobart, Tasmania. In the 1830s, this town was a prison for the hardest criminals in Britain. In order to pay the cost of providing for the criminals, the site needed to become a center of industry and the prisoners were forced to carry out hard labour.

These days it is a UNESCO World Heritage site and within the deteriorating buildings you will find torture cells, an onsite hospital and an asylum. It’s possible to take a ghost tour of the penal colony at sunset, to hear the fascinating horror stories of this dark location.

Located within a narrow isthmus in Shark Bay, this beach looks like your typical idyllic white sand beach at first glance. However, if you look more closely at the sand you’ll discover something amazing – it’s actually composed entirely of shells.

It’s one of the only two beaches in the world that is made of shells in this way – so how did it happen? This rare phenomenon is due to a massive bank of seagrass which blocks tidal inflow. Along with a high level of evaporation, this caused the water to have a salinity level twice as salty as the ocean.

This meant that many marine species couldn’t survive there, but cockles could. Over thousands of years, the shells of these cockles washed up on the shore creating the dazzling white beach 110 km long. Plus, the super-salty water of the area keeps out predators as well and makes it easier to float, making Shell Beach a popular spot to go for a swim.

Where will you go on your Australia adventures?

These are just a few of the most unconventional Australia destinations that you probably haven’t heard of. Be sure to take some time to go off the beaten track and discover more of what Australia has to offer… there’s a lot more to see than the main tourist attractions!