A Guide to Celebrating Carneval in Brazil

The city pulsates with Samba music as beautiful dancers festooned with glitter and feathers sashay down the street. The caipirinhas and cerveza are flowing and the drums are beating in an irresistible rhythm. Enormous parade floats glide down the streets, with larger than life sculptures and decorations and lavishly dressed dancers on board.

There’s no party in the world quite like the Brazilian Carneval. It’s a spectacle for the senses – an over-the-top colourful celebration that continues day and night to the uplifting, sexy spirit of the Samba.

This traditional festival takes place between the Friday Afternoon before Ash Wednesday, and noon on Ash Wednesday. It marks the beginning of Catholic Lent – a big “hurrah” before the 40 day period of abstainment from eating meat and other fleshly temptations. The name comes from a latin phrase “carne vale” – which translates to “farewell meat.”

The exact origins of Carnaval aren’t exactly clear, but it is thought the festival evolved from a pagan celebration of the arrival of spring in the Middle Ages. The Portuguese brought the tradition to Brazil in the 1500s. Then, indigenous costumes and African rhythms were added to the mix and give it a more local flavor.

It’s the biggest holiday of the year in Brazil and has grown over the years to an event of enormous proportions. The country comes to a halt every year and everyone hits the streets to join in with the dance.

The largest carneval celebrations in Brazil take place in Rio de Janeiro. The party in this coastal city drew 7 million people in 2019, which was an increase from 6 million the year before.

The samba schools in Rio de Janeiro are some of the largest in the country, and they compete to see who has the best costumes, the most elaborate floats and the most spectacular dances. The parade takes place at the huge Sambadrome Marquês de Sapucaí, a purpose-built stadium constructed for this event. 12 Samba schools compete from different communities in the city, each with over 1000 participants.

Tickets are sold out months in advance and are not cheap, but if you can’t get a seat in the stadium you can join one of the parades and parties on the street. They take place in the historic Lapa neighborhood and are free to watch. There are also free concerts to enjoy throughout the city in areas such as Largo do Machado and Arcos da Lapa.

As well as offering an unforgettable festival, Rio de Janeiro also boasts plenty for the traveler to enjoy. You can lounge in the sunshine on the famous beaches of Ipanema and Copacabana, or go shopping or cafe hopping in the trendy Leblon neighborhood. Or, take the cable car to the top of Sugar Loaf Mountain for a stunning view of the harbor. 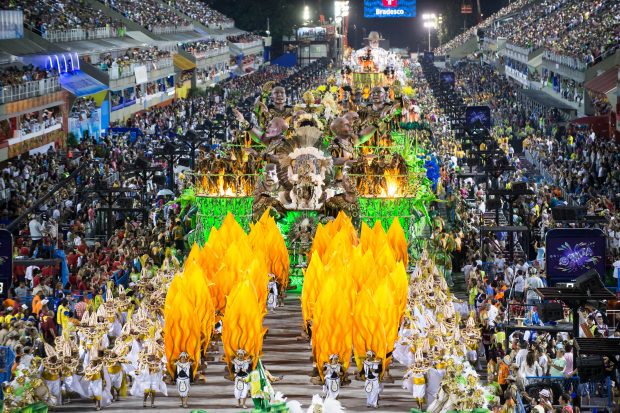 Rio de Janeiro isn’t the only place in Brazil you can celebrate Carneval. The party will be going on throughout the entire country and each destination has a unique way of celebrating. Here are some other great options for celebrating Carneval in Brazil:

Salvador de Bahia is the capital city of the state of Bahia, located in Northern Brazil. The city was once the capital of a Portuguese New World colony, and the history is evident in the beautifully preserved colonial architecture. Plus, Salvador de Bahia is located on the coast, so you can enjoy the sun-soaked beaches during your visit.

The Carneval in Rio might be the biggest overall, but Salvador de Bahia is known for throwing the world’s largest street party. It’s the second largest carneval celebration in Brazil and over two million people flock there for a solid week of partying.

Thanks to the large Afro-Brazilian community in Salvador de Bahia, African cultures and traditions are strongly on display during these celebrations. The music is not limited to Samba, it also includes “Axe” music – which is a fusion of African and Brazilian pop music. 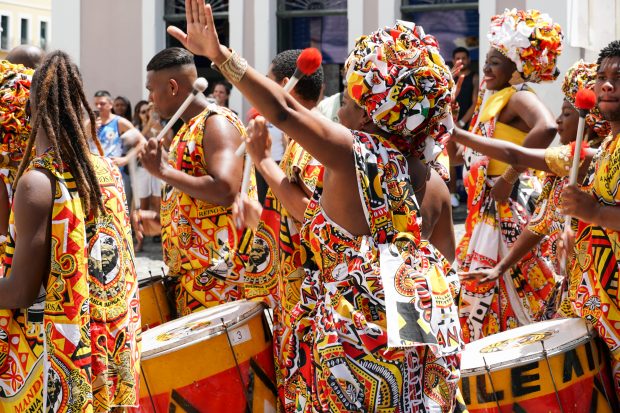 Fortaleza is the capital of the state of Ceará, and it’s another great place to celebrate carneval in Brazil. This region is known for the “maracatu” music, which is traditional to Northeastern Brazil. It’s an Afro-Brazilian genre that originated with the Kings of the Congo, slaves who were granted leadership roles within the slave community by the Portguese administration.

A traditional performance features a group of 80-100 people, along with a singer and a chorus. The costumes are incredibly ornate and decorative and imitate the Portuguese royal court of the Baroque period.

Fortaleza is also home to the famous “As Tavestidas” LGBT street carnival, which features fun and flamboyant drag artist performances.

If you are in São Paulo during the carneval season, you’ll get to join in with some pretty spectacular celebrations. São Paulo’s stadium is known as the Anhembi Sambadrome and it features a huge, bombastic, dazzling competition of the best local samba schools. The event takes place on different days to the one in Rio, as the competitions in both cities command the undivided attention of TV viewers all over Brazil.

The celebration in São Paulo isn’t just about the event at the Sambadrome either. There are neighborhood block parties all over the city, where locals don their homemade costumes and bang out samba rhythms on pots and pans from their own kitchens.

Or, if you want to celebrate in luxurious style you can try to get invited to one of the Carnival Balls. They are by-invitation-only, for the well-connected upper class of Brazilian society, and are more in the style of the European-tradition of Venecian masked balls.

Another great place to celebrate is the beautiful beachside town of Florianopolis in Santa Catarina. It’s surrounded by 42 pristine beaches and the weather is always hot and sunny.

As this is a smaller town there are only three main samba schools that compete during the festivities, but tickets for the performances are just as sought after – so book ahead of time!

Florianopolis is known for being a LGBT hotspot for carneval and many of the parties here have a gay-friendly focus. At the Pop Gay Carnival there is a drag queen beauty competition and a beach party that attracts over 50,000 attendees.

Planning to Attend a Carneval in Brazil?

These bright, loud, fun and flamboyant celebrations attract party-goers from all over the world and are incredibly popular. Whether you are attending carneval in Rio de Janeiro or any other city, you’ll want to book your tickets and accommodation as early as possible!

Get your mask, glitter and dancing shoes ready, stay hydrated, don’t forget the sunscreen and have fun living it up on a warm Brazilian night!

And don´t forget, TravelSim keeps you connected in Brazil! 1GB data just for 18€ and incoming calls are free!